The BBC’s website applies some historical tips on letter-writing to the world of email.

“”leave off writing for a moment – go and get the document referred to – and put it into the envelope. Otherwise, you are pretty certain to find it lying about, after the post has gone!”

Every day it seems that I’m doomed to rediscover that you don’t even get the option of un-sticking and re-sealing the envelope before the electronic post goes. 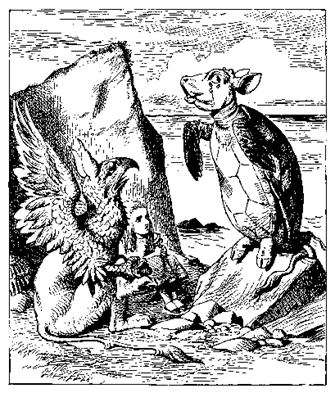 Mention of Lewis Carroll gives me an excuse to share a wonderful piece of trivia.

In the car the other day, I caught an episode of Radio 4’s Book of the Week, featuring Heston Blumenthal’s Historic Heston – an exploration and dissection of recipes from history. In Alice’s Adventures in Wonderland, one of the cast of surreal characters is the Mock Turtle (from which Mock Turtle Soup is made, of course).

What I delighted to learn is that in John Tenniel’s illustrations to the original edition of Lewis Carroll’s book, the Mock Turtle is depicted as a turtle’s shell with a calf’s head, hooves and tail.  How very cool 🙂

I should listen to Mr Carroll’s email tips!