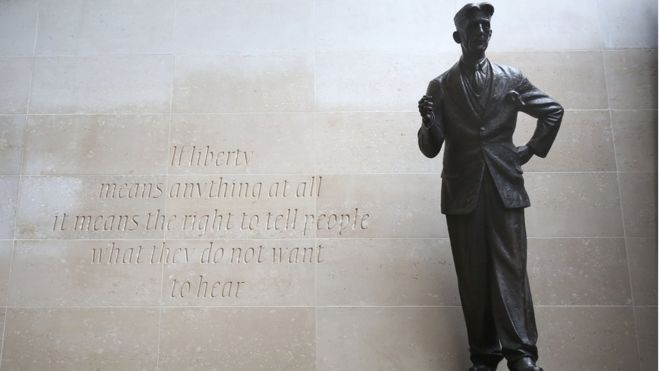 On Orwell’s Politics and the English Language #Writing

As the BBC unveils a statue of George Orwell, The Times’ Oliver Kamm takes a fresh look at Orwell’s famous essay Politics and the English Language:

Orwell’s essay is a misconceived and blundering polemic whose rules are alternately facile, foolish and destructive.

The essay’s opening sentence betrays its tendentiousness: “Most people who bother with the matter at all would admit that the English language is in a bad way, but it is generally assumed that we cannot by conscious action do anything about it.” Orwell cites no evidence to support his claim of the decrepit state of the language.

I don’t agree with the whole column, but I never wholly agreed with Orwell’s essay either, so Kamm makes an interesting read.

Much of Orwell’s advice makes for a sensible guide, but I find his objection, “Never use the passive [voice] when you can use the active” problematic.

As Steven Pinker observes in the excellent Sense of Style: The Thinking Person’s Guide to Writing in the 21st Century:

No English construction could have survived in the language for a millennium and a half unless it had continued to serve some purpose. … The passive voice, too, has several uses in English. One of them is indispensable to classic style: the passive allows the writer to direct the reader’s gaze, like a cinematographer choosing the best camera angle.

As usual, guides and rules get over-applied. And every repetition loses some of the original’s subtlety. Perhaps the underlying problem with Orwell’s rules in that people always neglect the sixth:

Break any of these rules sooner than saying anything outright barbarous.