I went to see this guy last night at the Camden Underworld. It’s ages since I’ve been out in London and I had a great night.  The area (and the people) reminded me of Neil Gaiman’s book, Neverworld. 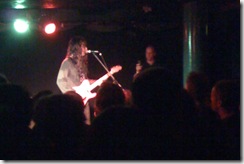 Nevermind. it was a great gig: very crowded, very sweaty, very loud and very, very good.  Before going along, I only really knew Richie Kotzen from his excellent 1994 album, Mother Head’s Family Reunion.  Of course he started in Poison and was also in Mr Big.  Either way, a great guitarist with phenomenal speed and some amazing stretches.  He also has a fine blues-rock/soul voice.
I was introduced to Kotzen by my guitar tutor, Nick Hollings and, by strange coincidence, I’ve just spotted that his son, Tom’s, band The Arusha Accord are playing at the Underworld in November.  Their debut album, The Echo Verses, is out on Monday.
Share on LinkedIn Share
Share on Facebook Share
Share on TwitterTweet
Share on Pinterest Share
Share on Digg Share
Send email Mail
Print Print
Guitar, Music