I’m delighted to be able to talk about this, now.  Around this time last year, I wrote the introduction for this book.

Iain Black – with enormous dedication, persistence and, surely, the patience of a saint – has compiled what is probably the first book dedicated to the Tokai Guitar Company’s sought-after replicas of early Fender Stratocasters.

In the late 1970s, Tokai’s Springy Sound and Les Paul Reborn models were a marked contrast in quality to Fender and Gibson’s “genuine” production models, a realisation which sent a shudder through the American guitar industry.  The history is somewhat convoluted but, in a nut-shell, it was these replicas which sparked Fender (and Gibson’s) interest in their own back-catalogues and gave rise to the huge market for ever more accurate (and ever more expensive) re-issues.  At the time, the guitars were being played by the likes of Billy Gibbons, Joe Walsh and Stevie Ray Vaughan. 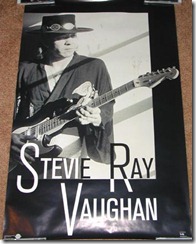 Famously, the guitar which Stevie Ray is playing in the cover painting of his debut album, Texas Flood, was a Tokai but the logo was airbrushed out.  Even today, the guitars are name-checked by the likes of Philip Sayce.

As well as producing its own models, Tokai’s facilities now produce official Fender models under license.

The book is the result, not only of Iain’s dedication but also of the generosity of members of the Tokai Forum, a community dedicated to these guitars, who donated photographs of their cherished babies.  There are a couple of mine in there, which is why I was taking this picture the other week.

Extra kudos also goes to Iain for including a charity donation for victims of the recent tsunami in Japan within the sale price.