A great snippet (and a great title) from this week’s Economist on US federal agents’ recent raid on the Nashville factory of guitar-maker Gibson.  They were apparently looking for ebony and rosewood which had been illegally imported into the US.  In a similar raid two years ago, agents seized both ebony and completed guitars.  Despite having sworn statements from the Madagascar government, Gibson have had to sue the US government to have their stock returned.

The article points out the flaw in the US’s Lacey Act which effectively requires importers to abide by every plant and wildlife law in the world, even if the local jurisdiction no longer enforce the law themselves.

The supply of quality tonewoods like rosewood and ebony is limited and such woods are highly prized by luthiers and musicians alike.  It has been argued that Japanese guitar makers like Tokai enjoyed at least some of their quality advantage in the late 1970s and early 1980s because Japan had not yet signed up to international treaties like CITES, on the protection of endangered species. 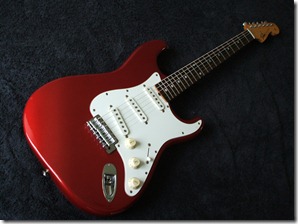 Which is a good enough excuse to include a picture of my own early 80s Tokai with a beautiful, dark rosewood fret-board…