Kurt at Cultural Offering offers a list of the greatest ever live albums:

I wholeheartedly agree with some, and do know others.  What would I add?  It’s hard to separate “great” from just plain “favourite”, but these are definitely missing:

And just out of interest, that Grateful Dead album is more correctly titled “Grateful Dead” but acquired the “Skull & Roses” title because the band’s debut was also eponymous.  And the reason for that is that when it was recorded, Phil Lesh insisted it would be called “Skull Fuck” … and the record company demurred.

The cover art comes from an iconic Sixties poster for a Dead concert at the Avalon which, in turn, was inspired by Edmund J. Sullivan’s 1913 illustration for the Persian poem, the “Rubaiyat of Omar Khayyam”.  There’s an interesting post regarding all this on Dark Star Palace. here. 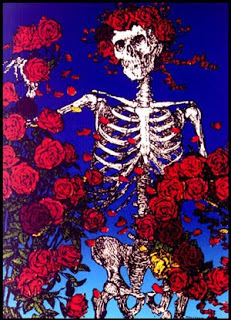