WikiLeaks and the Sovereign Individual

An interesting perspective on the WikiLeaks news story from South African columnist, Duncan McLeod.  Broadly, he sees the situation as an example of the inevitable breakdown of nation states as predicted by William Rees-Mogg and James Dale Davidson in their 1997 book the Sovereign Individual.

On balance, I take the Economist’s view that in the bigger picture, WikiLeaks is probably a bad thing.  It is naive to believe the world would run better if there were no such thing as private conversations.  That said, I tend to agree with McLeod that – whatever the rights and wrongs of this – WiKiLeaks is an example of the larger phenomenon that the old order, with which we have grown up and are very comfortable is changing and people’s views of the role of government and the individual are evolving.  In many, many ways this is a good thing but there will be uncomfortable moments and a painful transition. 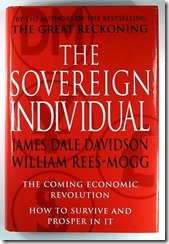