The sharp slap of the familiar

Today’s press is full of discussion about whether, in the event of a Yes vote in the Scottish Independence referendum, the remaining UK should have a new flag.  According to a survey by the Flag Institute (the UK’s national flag charity – who knew?), the answer is yes and a new flag should include an element to represent Wales.

Those same press articles include a range of designs, all of which look as if they were designed by anoraked people with an heraldic obsession and no eye for design.

For my money, the answer is simple.  It’s already been used in a marketing context by companies seeking to align British and Italian design sensibilities: simply replace the blue background of the Scottish saltire with the green of the Welsh flag.  Simple.  I couldn’t trace the advertising originals I have in mind but it looks as if David and Gwynneth Parker had a similar thought when the debate raised its head a few months ago. 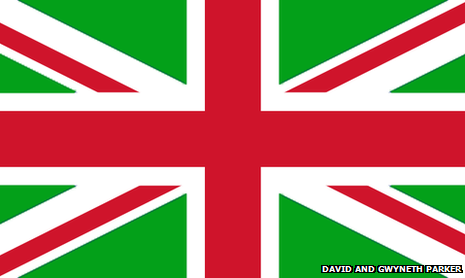 This elegant design is NOT featured in today’s press which I read in the pay-walled Times but can also be found here and here.

It is, of course, a matter of absolutely no consequence.

Except that people care.

The economic arguments for and against independence are well known and clear.  Yes, Scotland could survive as an independent state.  But, its residents (as distinct from disenfranchised Scots  in the rest of the UK) would be significantly worse off, by any sensible, objective judgment.

And it should unsettle supporters deeply that – despite the SNP’s 80 year prep period –  Alex Salmond still has no good answers for any of the important, questions that should be the core concern for any prospective government: currency, borders, international relations.

Yet, in some quarters, misplaced pride prevails.

Perhaps seeing the rest of the country getting on with life – addressing mundane, non-Scottish questions like a new flag – might bring a fresh perspective to what would be left behind.

I much prefer black to be added to a new British flag without Scotland because the Union Flag is based on the St/Cross flags of England,,Northern Ireland and Scotland. The new color should come from St David’s flag. In essence a black background would replace a blue background.